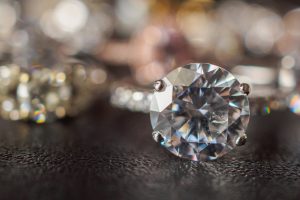 import duty evasion.  The former employee who blew the whistle on the scheme by filing a qui tam lawsuit received 22% of the recovery as a reward.

Millions of dollars in undeclared “assists”

The Anaya Gems case involved the second category — dutiable value fraud.  When goods arrive at U.S. Ports of Entry, the importer is required to declare their dutiable value.  Dutiable value generally consists of the “transaction value” (the price actually paid of payable for the goods) plus the value of any “assists” that were provided.  An “assist” is anything that the importer supplies either free of charge or at a reduced cost for use in the production or sale of the merchandise in question.  Examples of assists are tools, dies, or molds used in the manufacturing process, or component parts, materials, other items that are incorporated into the finished, imported product.

Anaya Gems’ jewelry was manufactured in Hong Kong and Thailand.  Upon entering the goods into the United States, Anaya declared the dutiable value based on the manufacturers’ invoices.  In many cases, use of invoice prices as the dutiable value is appropriate.  In the case of Anaya Gems, however, the invoice prices understated the dutiable value by approximately 65%.  This was because Anaya Gems had provided assists to the manufacturers in the form of diamond gemstones.  The gemstones, which had been shipped directly to Hong Kong and Thailand by Anaya Gems affiliates in India, were incorporated into the jewelry.  The value of the gemstones, however, had not been added to the declared transaction values as required.  The whistleblower alleged that the company thereby evaded millions of dollars in import duties over a twelve-year period.

Notably, to be liable under the False Claims Act, it must be proven that the defendant acted “knowingly.”  Here, the whistleblower satisfied this requirement by showing that the duty evasion was deliberate.  In particular, the whistleblower presented evidence that Anaya Gem’s computerized internal corporate records tracked the full costs of the jewelry — including the diamond assists — and the import duties that would have been required had the assists been declared.  The company even determined the prices to charge its customers based on its total supposed costs — including the undeclared assists and unpaid duties.

Tariff evasion is believed to be rampant

U.S. Customs and Border Protection (CBP) inspects only a fraction of arriving shipments.  Under what is essentially an honor system, importers themselves are expected to properly declare and pay the duties they owe.  As a result, tariff evasion is believed to be rampant, and to generally go undetected.  As a result, False Claims Act recoveries like that against Anaya Gems are only possible when folks with inside knowledge — generally, former employees — are willing to step forward and become qui tam whistleblowers.

The Justice Department has expressed a strong interest in tariff enforcement which is seen as necessary to ensure a level playing field for American businesses.  Businesses that evade import duties are engaging in unfair competition.  Increasingly, businesses that are finding it difficult to compete with rivals who are cheating on their import duties are becoming whistleblowers to combat this.

If you are considering blowing the whistle on import duty evasion, reach out for a free and confidential consultation with Mark A. Strauss, an experienced whistleblower attorney.