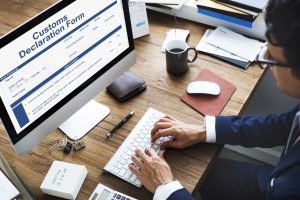 s supplier CWD Holdings, LLC – which does business as Centric Parts – has agreed to pay $8 million to revolve claims it knowingly evaded import duties owed on imported brake pads.  Two former employees of Centric who blew the whistle on the customs fraud scheme by filing qui tam lawsuits under the False Claims Act will share a $1.48 million reward.

The Centric case involved the third category — HTS duty-rate misclassification.  Specifically, the whistleblowers alleged that, for over a decade, Centric knowingly imported “mounted” brake pads that were subject to a 2.5% tariff under the Harmonized Tariff Schedule.  However, on the Form 7501 “Entry Summary” declarations that it filed with United States Customs and Border Protection (CBP), it routinely misclassified those imports as “unmounted” brake pads which were generally not subject to a tariff.  Centric thereby allegedly evaded millions of dollars in import duties.

The Centric case features a prime example of a fraud that was exposed and stopped only because corporate insiders were willing to step forward by filing qui tam lawsuit under the False Claims Act.  The fraud otherwise likely would have remained concealed.  Customs officials are able to inspect only a small fraction of shipments arriving at U.S. Ports. They rely instead on what is effectively an “honor system” in which the importers themselves are supposed to declare and pay the duties they owe.  As a result, it is believed that customs fraud and tariff evasion are common, yet to mostly go undetected and unreported.

The Justice Department has stated that it has a strong interest in the enforcement of tariffs to ensure a level playing field for law-abiding American companies and workers.  It notes that businesses that evade import duties are competing unfairly and should be held accountable.

The Centric Parts case is notable for the fact that, unlike most customs fraud lawsuits under the False Claims Act, it did not involve a fraud that was ongoing at the time the action was filed.  Instead, the case involved a supposed “error” on the part of the violator that it decided to correct only prospectively.

Specifically, the whistleblowers discovered Centric’s misclassification of the brake pads and brought it to senior management’s attention in 2017.  In response, Centric changed its practices and started using the correct HTS classification – and paying the applicable 2.5% duty to U.S. Customs – on all subsequent brake-pad shipments.

However, at the same time, Centric decided not to disclose its past violations to CBP or to make up the previously unpaid duties.  Instead, it tried to keep the matter under wraps, hoping to continue to conceal its history of underpayments from CBP.  Corporate managers even instructed an employee to delete his emails relating to the issue.

This failure to report and make good violated Centric’s obligations as an importer.

Indeed, importers are required to file CBP Form 7501 Entry Summaries and swear under oath that they are correct.  Among the items required to be verified is the applicable Harmonized Tariff Schedule classification and duty-rate.

The law also also imposes a continuing obligation to correct inaccuracies.  Specifically, Form 7501 includes a clause requiring the importer to “immediately furnish to the appropriate CBP officer any information showing a different statement of facts.”  That clause is pursuant to Section 1485 of the Tariff Act of 1930 which requires importers to “produce at once” any documentation or information they discover showing that statements in a previously filed Entry Summary were in fact untrue.

Centric thus had an obligation to self-report its violations and make up the underpaid duties on its prior imports.  Notably, the whistleblowers’ allegation that Centric violated the False Claims Act “knowingly” — a critical requirement for liability — was based on  its failure to honor this obligation.

If you have information or evidence about customs fraud, call Mark A. Strauss, an experienced whistleblower lawyer