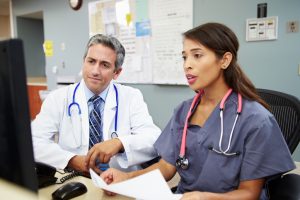 The fraud was exposed by a former ModMed executive who filed a qui tam lawsuit under the False Claims Act. He will receive a $9 million whistleblower award.

Under the so-called “Meaningful Use” program of the Center for Medicare & Medicaid Services, the federal government pays cash incentives to medical providers including physician medical practices to encourage them to use Electronic Health Records or EHR technology.

At the same time, the Anti-Kickback Statute or AKS prohibits parties from directly or indirectly offering or paying any type of remuneration to induce the referral of items or services paid for or reimbursed by federal healthcare programs, including Medicare and Medicaid.  Kickbacks prohibited under the AKS include not just cash but also free or reduced priced goods or services.

Notably, under an AKS “safe harbor” exception, certain parties—including pathology laboratories—are allowed to “donate” money or technology to medical practices to help them pay for EHR systems.  Those donations, however, cannot be tied to the “volume or value” of referrals or other business between the parties.

ModMed and Miraca allegedly engaged in business arrangements that did not qualify for the AKS “safe harbor” exception and therefore violated the AKS and False Claims Act, according to the DOJ.

Specifically, the companies allegedly arranged for Miraca to “donate” ModMed’s cloud-based EHR software to medical practices that used Miraca’s lab services.  Meanwhile, ModMed agreed with Miraca to modify the user interface of its EHR system to drive lab-testing orders to Miraca as opposed to competing labs.  The changes to the interface made it virtually effortless for doctors using the EHR system to route lab-tests orders to Miraca but complex and time-consuming to direct them to other labs.

A competing lab emailed Miraca complaining that its “exclusivity arrangement” with Miraca violated the AKS.  Those concerns, however, were disregarded, according to the DOJ.

ModMed also allegedly paid other illegal kickbacks.  Specifically, the EHR firm allegedly gave physicians gift cards, service credit fees, and referral fees in exchange for recommending its product to other healthcare providers.  It also allegedly paid a medical industry “billing expert” for her “exclusive endorsement” of its EHR system in her emails and newsletters to clients and on her website.

The False Claims Act—the U.S. government’s primary legal tool for fighting civil fraud—imposes substantial liabilities on parties who knowingly defraud the federal government or its agencies.  Under the statute, private parties known as whistleblowers or qui tam relators are entitled to file lawsuits on the government’s behalf and share in any recovery.  Specifically, False Claims Act whistleblowers generally receive awards of 15-30% of the recovery.  Because False Claims Act violators are liable for treble (three times) damages plus penalties, those proceeds can be substantial.

Claims submitted for payment or reimbursement to federal healthcare programs that include items or services resulting from AKS violations constitute false or fraudulent claims under the False Claims Act.  In the lawsuit against ModMed, the DOJ alleged that the company violated the False Claims Act by causing its EHR system users to submit claims for EHR incentive payments and lab tests that were tainted by the illegal kickbacks.

Speak to a whistleblower attorney