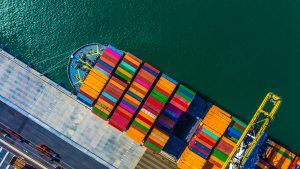 The U.S. government imposes anti-dumping and countervailing duties to level the playing field for domestic industries when foreign competitors receive subsidies or other financial benefits from their home countries, or when they sell their products in the United States at prices below “normal value.”  In 2011, the U.S. Department of Commerce ordered AC/CVD duties of up to 400% on certain extruded aluminum products from China.

Pursuant to the scheme, from 2011 to 2014, the defendants disguised and falsely misclassified imports of extruded aluminum subject to the AC/CVD duties as aluminum warehouse pallets, which, as supposedly finished aluminum products, were at that time not subject to U.S. tariffs, according to the U.S. Department of Justice.  The extrusions were spot-welded together to make them appear to be pallets and, after importation, stockpiled by the defendants in warehouses in California and New Jersey.

The Zhongtian-controlled entities then sought to develop aluminum melting facilities in the United States to transform the supposed pallets into forms of aluminum that were more commercially valuable, the U.S. Department of Justice said.

The U.S. government also charged Zhongtian  in connection with the scheme.  In addition to probation and the $1.8 billion in restitution, the remedies ordered by the court included the seizure of the warehoused aluminum, worth approximately $70 million.  In 1993, Zhongtian founded China Zhongwang Holdings, which has become one of the largest aluminum extrusion companies in Asia.

Customs fraud qui tam lawsuits are generally brought by employees or ex-employees of violators, as well as by honest business competitors unfairly disadvantaged by rivals cheating on their customs duties.  Whistleblowers can be from any country.

Customs frauds generally fall into three categories—(i) the misdeclaration of the “country of origin” or transshipment, typically to evade Section 301 trade-war tariffs, (ii) the use of phony or doctored commercial invoices to undervalue the imports, and (iii) the use of erroneous Harmonized Tariff Schedule (HTS) classifications to reduce the duty rate or avoid AD/CVD duties.  The Zhongtian case involved HTS misclassification, among other fraudulent conduct.