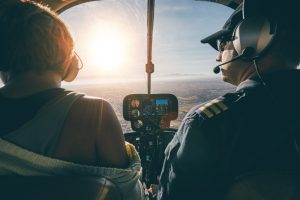 Universal Helicopters Inc. and Dodge City Community College have paid $7.5 million to resolve allegations they violated the False Claims Act by making false statements to the U.S. Department of Veterans Affairs in connection with a training program they jointly run for helicopter pilot flight instructors in Ford County, Kansas and Chandler, Arizona.

Universal paid $7 million, while Dodge City paid $500,000—an amount the U.S. Department of Justice noted was based on Dodge City’s ability to pay.

The whistleblower alleged that from 2013 to 2018 Universal and Dodge City made false statements to the VA about program enrollment figures to obtain millions of dollars in VA funding to which they were not entitled.

Under the Post-9/11 Veterans Educational Assistance Act of 2008—known as the Post-9/11 GI Bill or the New GI Bill—the VA provides educational benefits including tuition and fee payments to qualifying schools on behalf of military veterans who have served since September 11, 2001. This includes financial support and educational benefits for military veterans to pursue helicopter pilot flight training degrees.

Schools receiving Post-911 GI Bill funds are required to certify to the VA that no more than 85% of their students are VA-funding recipients.  The purpose of this requirement—referred to as the “85-15 Rule”—is to help ensure that the tuition rates paid by the VA reflect fair market value for the education provided.  Schools must provide the VA with accurate enrollment data and sworn certifications that the 85-15 requirement is satisfied.

As a result, Universal and Dodge City decided to evade the enrollment requirement by falsely certifying compliance with the 85-15 Rule despite that virtually all their students were military veterans whose tuition was paid by the VA, according to the whistleblower’s False Claims Act complaint.  In addition, Universal and Dodge City violated VA rules by counting part-time students enrolled in only one online class per semester as full-time students to help appear to reach the required 15% threshold, the whistleblower alleged.

The False Claims Act, which dates back to the Civil War, imposes substantial liabilities—three times damages plus penalties—on persons who knowingly defraud the federal government or its agencies.  Under the False Claims Act’s qui tam provisions, whistleblowers are entitled to file lawsuits on behalf of the United States and receive whistleblower awards of 15-30% of any recovery as well as legal fees and expenses.

If you know of parties obtaining government funds by fraudulent means, reach out to whistleblower attorney Mark A. Strauss for a free consultation about your rights as a potential False Claims Act relator.